As a sleight of hand artist, or close-up magician, I occasionally get to perform at really fun venues. Such was the case last month in Minneapolis, MN at The Theater in the Round.

It was an evening of magic, manipulation and illusion.  In the photo, shown here, I am finishing my close-up magic performance with a classic magical effect called, The Cups & Balls.  Here, in a finale I created back in 1975, one of the cups magically fills with pennies and pours out on to the table.  Who says, magic doesn’t make any sense… (cents )

The priceless expression on the face of my audience helper, makes this one of my all time favorite magic photos.  I hope you enjoy it.    🙂

Twig Oaklyn Flewinia Thistlebottom…
Whew! That’s quite a name.  Fortunately her friends know her simply as Twig, the fun, whimsical, magical faerie that graces the renaissance festivals.  The young at heart, who are fortunate enough to meet her, often find themselves sprinkled with faerie dust and presented with a magical gem!   But be aware, if you ask what the secret is in her hands, she will only answer with her flute.  I hope you are fluent in double piped aulos. 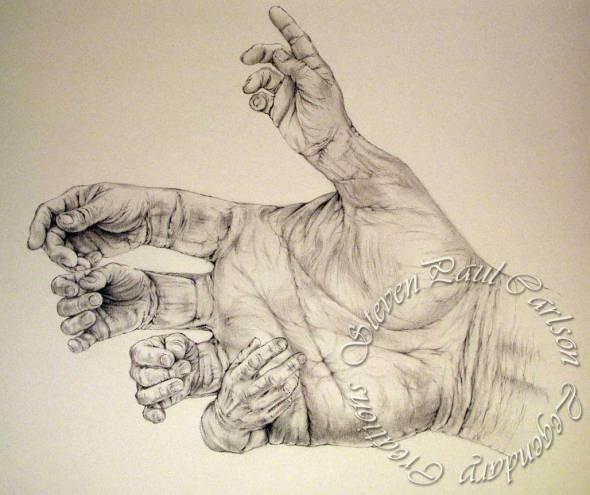 This pencil drawing is still in progress. I sketched the original back in 1972, I was still in high school. My intention was to paint it however I never finished it and it has since been lost. I decided to start it up again and see where it would take me.

In high school I was very interested in this fascinating art movement called Surrealism. It greatly influenced my art at that stage of my young life.

Surrealism began around 1920 its objective was to combine incongruous images blending dream state with reality. Probably the most famous surrealists are Salvador Dali, Rene Magritte and Max Ernst. The word “surrealist” was coined by Guillaume Apollinaire.

A rare moment of relaxation for a Wizard; pictured here in repose with his extended family, this Wizard, though very old, is an imposing figure. Even seated he exudes the unmistakable power and wisdom of a Wizard of the highest order. Standing to his full height he would reach seven feet. His magical wolf and owl companions are also considerably larger than their kin. Only his feline companion, T. Thomas Tiger, Esq., is natural in size. The hidden images of faeries, raptors, dragon and wizard faces enhance the magic and mystique of this limited edition creation.