Look in the center of the Kitty’s paw 😉 I caught this shot by total accident. My greyhound dog Gabbie and I were in Colorado; I was showing my art there at the Renaissance festival. At our apartment, one floor below us lived the cutest and most unique cat. He love to ride in the car and even went for walks on a leash with his human.

One morning during Gabbie’s and my walk there he was sitting on his balcony, very focused on something his little head moving, obviously following something. I could not tell what he was so intent on but I had to get a photo of his extreme focus and concentration. As I clicked the camera his paw shot out at something in the air. I still didn’t know what until I pulled up the photo in my computer. He had smacked a bug right out of the air right off its flight path.

Suitably named the King of Beasts, the regal stature of this noble monarch is caught here in a moment of repose.  The last rays of the setting Serengeti sun wash across his majestic face and mane.  A nocturnal hunter by nature, the coming crepuscular hour marks the beginning of the lion’s workday.

Revered for its legendary strength and bravery, the lion has been a symbol of supremacy throughout recorded history.  The full grown male conveys a grandeur and self-assurance like no other animal.  His magnificent mane is reminiscent of a king’s ceremonial headdress or an Indian chief’s war bonnet.  His roar, a low grumble building in intensity sends a vibrating signal throughout his domain and literally makes the earth quake.  All these unique qualities, and more, make the lion the undisputed king of beasts, the Monarch of the Animal Kingdom. 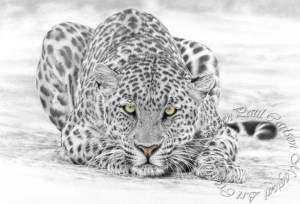 Every muscle relaxed with paws tucked in close, his lithe body low and snug to the terrain.  Patient and motionless with perfect camouflage the leopard becomes virtually invisible to their prey.  What animal can match this intense focus so unique to the feline?  Whether it’s a big cat or small all cat owners are familiar with this distinct posture and look.

This is a gicleé print hand colored by the artist.  Steven Paul Carlson