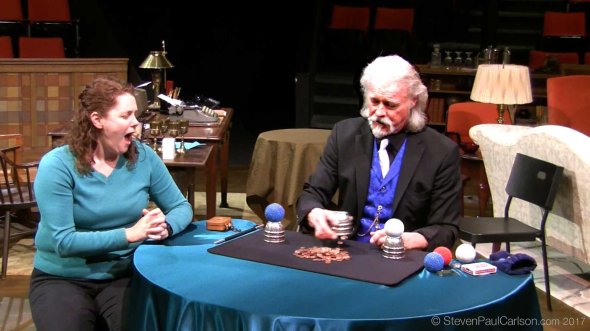 As a sleight of hand artist, or close-up magician, I occasionally get to perform at really fun venues. Such was the case last month in Minneapolis, MN at The Theater in the Round.

It was an evening of magic, manipulation and illusion.  In the photo, shown here, I am finishing my close-up magic performance with a classic magical effect called, The Cups & Balls.  Here, in a finale I created back in 1975, one of the cups magically fills with pennies and pours out on to the table.  Who says, magic doesn’t make any sense… (cents )

The priceless expression on the face of my audience helper, makes this one of my all time favorite magic photos.  I hope you enjoy it.    🙂