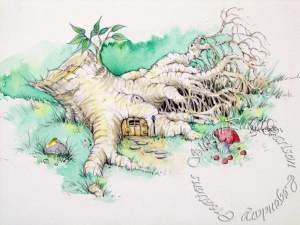 May the reader bear in mind, the information offered here regarding these very shy and illusive creatures, is based on only a small number of sightings since the history of the “big folk” began to be documented. Sightings of Faeriegnome dwellings are fortunately a little more common. Both these sources and recent archaeological discoveries help to provide us with our current knowledge of the Faeriegnome folk, their temperament, attributes and customs.

Faeriegnomes are ancient creatures, tiny, quiet and shy by nature. They were believed to be of simple gnome ancestry but they predate even the earliest gnomish records. They are much smaller than a gnome, but larger than the leaf faerie.

Faeriegnome architecture is known for its clever construction and unique creativity.

The unique coalescence of both the Fae and Gnome bloodlines seems to account for their vast magical abilities, their immeasurable ingenuity and ancient wisdom. It also explains their extreme diminutive size. The size of the average adult male, by their standard of measurement, would be about 54 to 63 digits or fingers, which would be about 2.5 to 5 cm or 1 to 2 inches tall.

Writings predating antiquity indicate Faeriegnomes were a part of the Great Earth Caretakers. Their ability to travel extremely long distances enabled them to keep a watchful eye on the delicate balances of nature. Assisting them in these earthly stewardship responsibilities were their ever present, always faithful walking sticks, ‘Astar’, as they call them. The wood of the astar was from a tree, bush or plant of unknown origin. Interestingly, the astar continued its growth despite being separated from the root. In fact, it had to be regularly pruned or it would quickly outgrow its owner! Ordinarily the astar was quite plain, but on occasion a particularly creative and fastidious Faeriegnome might adorn it with a little silver, gold, gems or even seashells.