The Hole in the Glass of Wine 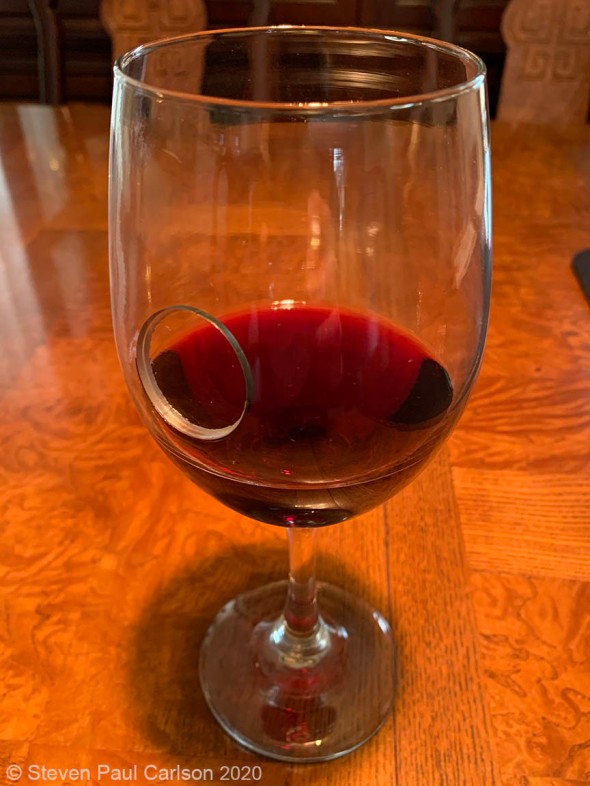 Having been a professional magician for over 45 years I have witnessed some pretty amazing things.  The three I am about to share are the most memorable because they happened directly to me, unexpectedly and accidentally.  It is in these rare moments that the seasoned magician, caught totally off guard, instantly becomes a simple, baffled spectator.

This occurrence caught me totally off guard and was by far the most astonishing thing I have ever witnessed.  I was sitting at my computer for a relaxing evening, finishing up some small business tasks.  I poured a glass of wine.  It was the end of the day and time to unwind.

There’s a perfect hole cut into the side of the glass… like a laser cut hole about the size of a nickel!  At this moment I was witnessing something so startling and unexpected my brain could not comprehend it.  There was that rush of adrenalin causing all my senses to go into overdrive trying to deal with this bizarre phenomenon.  A chill pass through my body and the hair on the back of my neck stood up.

This is unbelievable, how can this possibly be?!

In that moment of total astonishment I was convinced I was witnessing some kind of bizarre supernatural phenomenon.  The only explanation was REAL MAGIC!  Something unbelievable had just happened to me!

I slowly reached a finger out to touch the hole in the glass.

But wait… let’s go back in time just 20 minutes.

As I was opening the bottle of wine I used a foil cutter to remove the top piece of foil. I removed the cork and poured a glass of wine.

So what really happened?

Good magicians never reveal their tricks. However this was no trick, at least not in the traditional magic sense. This was in reality a strange and bizarre accident.

When I used my foil cutter to remove the foil top on the bottle one of the cutting wheels was loose and didn’t line up with the other wheels so it cut an extra piece of the foil.  A perfect thin foil ring as thin as the glass itself.

I had removed the cork and poured the wine. The thin foil ring, still on the bottle, fell from the neck of the bottle into my glass unnoticed along with the wine. While I was drinking my wine the foil ring, by a bizarre chance, stuck to the inside of the wine glass, clinging to the glass with the help of the liquid.

This really was a freak accident, try as I might to recreate it later on I could not.

Back at my computer when I looked down at my glass and saw the “hole” I was dumbfounded. It was a perfect illusion. I can’t think of a strong enough word to describe my emotions at that moment. As a magician I deal in the impossible, I work creating the illusion of miracles, I believe in the impossible. As I said before, for a brief few moments I was convinced I was witnessing true magic at work!  Or could it possibly be some spirit being trying to freak me out.

After a moment or two I mustered the courage to stick my finger into the hole.

I’m not sure what I would have done had my finger actually passed through the hole?

My finger did not go through a hole but hit glass.  That is when the magic bubble burst.  I instantly realized what I was actually seeing.

It truly was a perfect illusion a stunning magic trick, a bizarre accident, presented for an audience of one!  Presented just for me, for my sole amazement and entertainment.

For a brief moment I, a professional magical performer for over 45 years, instantly became a baffled & bewildered spectator.

I loved every moment of it… because I remembered that this feeling of total amazement was why I got into magic in the first place. I wanted to enable my audience to experience this very same feeling of wonder and amazement all the time.