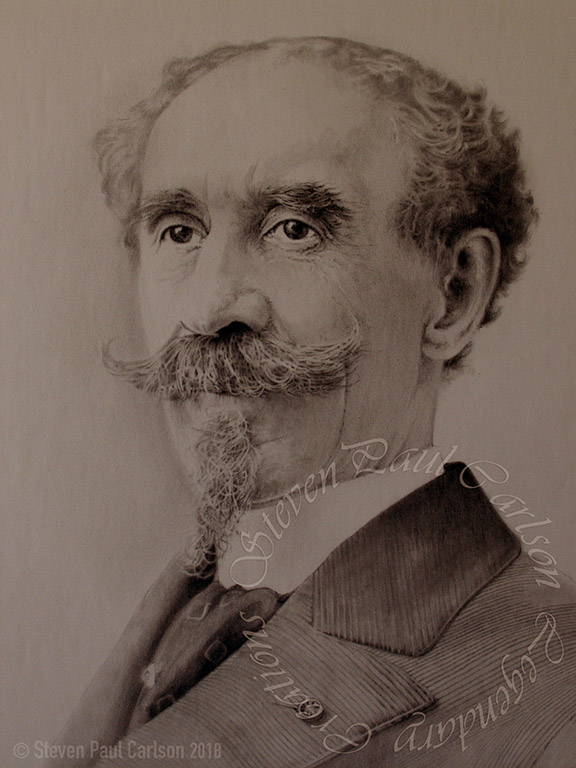 Alexander Herrmann, better known as Herrmann the Great, came from a family of magicians. He was the youngest of 16 children born to Samuel Herrmann and Anna Sarah (Meyer) Herrmann. His father, Samuel, born in Germany, was a magician but also became a physician. As Samuel’s family began to grow he gave up his magic to practice medicine full time. Samuel moved his new family to France.

Samuel’s first son was Compars “Carl” Herrmann.  Compars, opposite from his father, left medical school to go into magic full-time.

Alexander also had a great interest in magic and Compars, took him on as his magic assistant at the young age of 8. They traveled throughout Europe with a very successful show.

Alexander, began his own independent career in magic in 1862 in American. He had a number of very successful tours in England and Europe. But out of respect to his older brother Compars, Alexander moved back to America settling into his own successful magic career.

Alexander was tall and thin and always dressed immaculately. He had wavy black hair and wore a magnificent handlebar mustache with goatee which added to his Mephistophelean appearance.

According to H. J. Burlingame, Alexander Herrmann’s personality presented “an atmosphere of mystery about the magician.” Burlingame also noted that Herrmann was one of the kindest and gentlest of men.

Herrmann died on December 16 1896 at the age of 52. Herrmann’s wife Adelaide, continued her husband’s show becoming the Queen of Magic, the first lady of magic. She performed for 25 years retiring at the age of 75.

Herrmann the Great performed a large stage illusion show but he was best known for his elegant sleight of hand.

This entry was posted on June 18, 2018 by Steven Carlson. It was filed under Uncategorized .